Credit to Jordan Katz for the lovely caption. 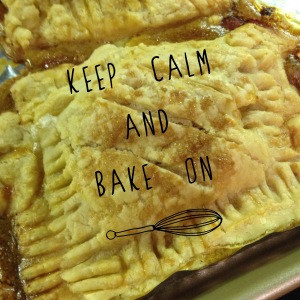 In Atlanta, when it snows, people panic, and when people panic schools are closed. Unfortunately before we got the call that school was closed, I purchased apples for my 32 person class. One of my classes has us bring in food each week and this week was my week.  So now I had a snow day and 32 apples that were going to go bad before I had class next week, so I decided that apple baking was how I was going to spend my snow day. Our first experimental recipe was for apple turnovers. (Hence the caption)

We used the recipe below for the inside of the turnovers and for the puff pastry we used this recipe. For the flour we used Glutino’s All Purpose Flour. The dough was really sticky so we kept adding more flour. Partially because we didn’t use stick butter, we used the tub and measured it out. The recipe made a lot of dough, but because it was so sticky we had trouble flattening it and folding it. Instead of making triangle turnovers, we made squares. The dough was super thick though so I would suggest putting more apple in the turnovers, even if the edges wont close, the dough will fall and stick together when it bakes anyway.

We put them in the oven for 30-35 minutes but I think longer might be better. We didn’t have parchment paper and were using aluminum foil so we were afraid to put them in longer because we thought they might burn. Also our oven has been cooking unevenly lately so in a normal oven they would probably cook differently.

The dough required so much butter (earth balance) that we ran out of butter so that was the only recipe we were able to make, but apple chips, baked apples, and warm apples are on the list of the rest of the week. 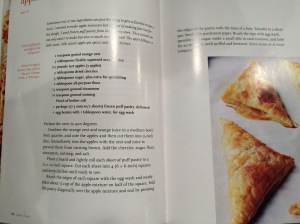 One thought on “Turn Over for What!”