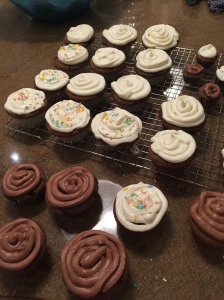 A few weeks ago, I received my very first “Send Me Gluten Free Box”** and I was so excited because this month’s box happened to include two mixes! One was a pizza dough mix, which I have not tried yet. The other was a Chocolate Cake Mix from Zenero Gluten Free. Last night, I decided to bake the Chocolate Cake Mix from Zenero Gluten Free with homemade Mocha frosting. The mix yields 3- 9in cakes, but I was baking this for fun and knew if I baked it that way, a lot of cake would end up going to waste. Instead, I decided to make it into cupcakes and bring them into work. The mix made about 2 dozen cupcakes and 10 mini cupcakes. I probably could have scraped the bowl and ended up with 12 mini cupcakes but I didn’t think I would have enough frosting to cover all of them. I also filled the cupcake tins way too high so my cupcakes were a bit large. (Note to anyone who tries this mix, the batter looks dense, but don’t worry, it rises.)  I probably could have made 3 dozen cupcakes had I filled them half way but now I know for next time 🙂

Zenero products have not hit the East Coast yet, but you can order their mixes online here: https://www.zenerogluten.com/products

**“Send Me Gluten Free” is the same concept as Birchbox and other sample subscription services except each month you get a box full of gluten free products! It has now been bought by Love With Food.

This review was not endorsed by Send Me Gluten Free or Zenero Gluten Free.